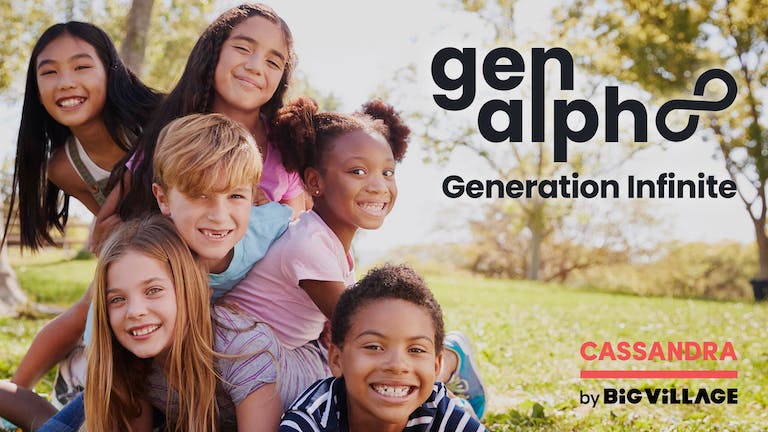 Faced with both infinite possibilities and challenges, Generation Alpha may be better called Generation Infinite

NEW YORK, NY, JULY 11, 2022 – Generation Alpha – the next generational cohort coming up after Gen Zs, who today are roughly 12 and under – is facing a world that is infinitely harder than the one their parents grew up in but they also recognize infinite possibilities, according to a new report, Gen Alpha: Generation Infinite from Cassandra, Big Village’s insights and strategy group that studies trendsetting young consumers. The report, which is the first comprehensive examination of this age group as a generational cohort, reveals much about this generation, where change has been a constant.

“The iPad was a game changer. The Pandemic was a game changer. TikTok is a game changer. The incredible speed with which the world moves today often means the game changes before all the pieces can even be put on the board of the last game. And this is the world Gen Alphas were born into,” said Kathy Sheehan, Senior Vice President, Cassandra. “A world with technological and scientific breakthroughs that prior generations could not even imagine. But also, a world that sometimes feels like it is on the edge of social, political, and environmental collapse. When the outcome of our entire world order is anyone’s guess, Gen Alpha’s well-being depends upon their ability to ride these waves of chaos.”

Technology and being digitally native plays a large role in how Generation Alpha sees themselves and the world around them. In fact, 55% of 7–12-year-olds use social media, and 76% of those surveyed believe technology’s good outweighs its bad. Technology has become Gen Alpha’s tool of choice, putting it at the center of everything they do, including learning, with 77% of Gen Alpha’s saying they learn best when they use technology. With that in mind, it is not surprising that 82% of Gen Alpha agree they can figure most things out if they have access to technology.

While Gen Alpha clearly values humor, kindness and creativity in themselves and others, when asked how they introduce themselves, 58% of them said as a gamer, with gaming topping the list of favorite pastimes for them. To further drive the point home that social media and technology is shaping the generation, 64% of Gen Alpha would rather be a YouTube / Social Media Influencer than the President of the United States. But social media is not all the generation cares about. Mental health also weighs on the minds of Gen Alpha. 59% of Gen Alpha agree that mental health is a big issue and 62% say their school should focus more on mental health education than physical education.

“The market has been calling them Gen Alpha, but at Cassandra, we see them as so much more than simply the next generation following Zs,” continued Sheehan. “Generation Alpha is the most socially aware generation we have studied. Between living their most critical years in terms of development through a global pandemic and carrying the weight of previous generations and their decisions on their shoulders, they are coming of age in an infinitely complex world full of infinite challenges. Despite this, they exhibit kindness, empathy and fluidity and the belief that they have also been handed what they see as the answer to a lot of these challenges – unmatched technological access and ability from a very young age. And with this comes infinite possibilities. That is why we believe that Generation Infinite might be a more apt name for this next cohort.”

Alphas take ownership over their identity. They are curious and openly challenge outdated notions around gender and sexuality and everything else. 84% of Gen Alphas surveyed believe a person’s pronouns should be respected and fight for the right for people to be able to express who they are. Do not assume anything about Gen Alpha. They will let you know who they are.

Gen Alpha: Generation Infinite is the culmination of research that was conducted this spring among children, their parents and early childhood experts. Cassandra fielded a quantitative survey among a nationally representative sample of 1,000 US parents of Gen Alphas, and 700 older Gen Alphas (7–12-year-olds) along with expert interviews, Gen Alpha and Parents focus groups, and Teacher and School Counselor groups.

To learn more about the Cassandra Report® and the benefits of becoming a Cassandra client, please visit https://cassandra.co.

About Cassandra by Big Village
Cassandra is the foremost authority on Millennial, Gen Z, and Gen Alpha research focusing on emerging trends, generational insights, and youth behavior. Cassandra is an insights and cultural strategy group within Big Village, a global advertising, technology, and data company. As the leading experts on young consumers and the cultural forces shaping their lives for nearly 20 years, Cassandra empowers companies to See Tomorrow™. Find out more at https://cassandra.co

About Big Village
Big Village is a global advertising, technology, and data company. Driven by our diverse group of experts, we provide a new way of working by bringing programmatic solutions, media, insights, and creative all under one roof. Big Village is headquartered in New York and has 12 offices across North America, Europe, and Australia. Find out more at https://big-village.com/