Majority of Gen Z Believe What They Eat Defines Their Identity 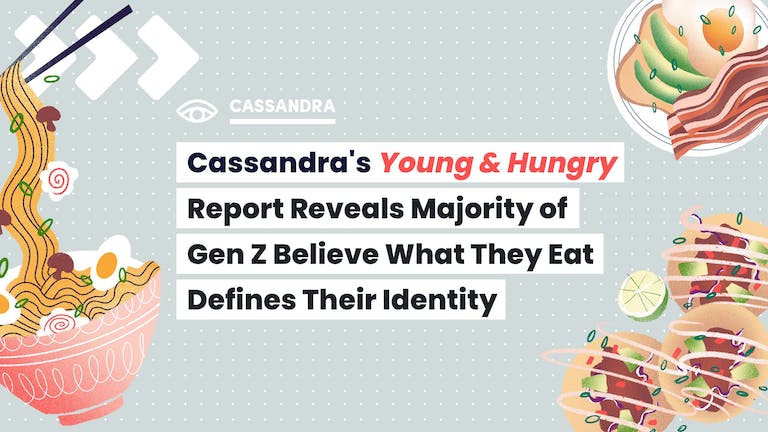 NEW YORK, NY, JUNE 13, 2022 – Being a “foodie” is now a central component of the Gen Z identity –according to a recent study released by Cassandra, ENGINE’s insights and strategy group that studies trendsetting young consumers. According to the report, Young & Hungry, Gen Z considers themselves the “foodie” generation – fueled by a desire to discover new recipes and finding inspiration to become at-home chefs through social media platforms such as TikTok. As their relationship with food is shifting, more Gen Zs are embracing a holistic attitude about food that transcends taste and calories and also factors in food morality, nutrition and its impact on mental health.

Young & Hungry, was crafted through Cassandra’s qualitative and quantitative research, which spoke to more than 1500 US and UK youth between the ages 14 to 34. The report unwraps how young people are consuming food, how they’re consuming culinary content online and how, when, why and what they’re cooking and finding inspiration.

To say that food matters to young consumers is an understatement. More than half of all Gen Z respondents stated that what they eat is indicative of who they are as a person. As food has become a bigger part of Gen Z’s identity, their food morality has shifted away from calories as a moral measure for “good” and “bad” food, instead prioritizing taste, nutrition, and overall improvement of mental health. In fact, 47% of Gen Z surveyed stated that in the next few years, they will be prioritizing more mental health focused eating.

Still, a quarter of Gen Z continues to view diet culture as a modern trend. While seeing through the algorithm is a trait of today’s youth, it’s critical that the corners of the internet that push harmful diet culture are taken into account as 1 in 4 Gen Z and Millennial see diet-focused eating trending up.

“Gen Z is truly leaving its mark on everything it touches – and the food industry is no exception,” said Kathy Sheehan, Senior Vice President, Cassandra. “Gen Z is changing the face of the industry, putting a greater emphasis on a holistic approach to food and using it as a way to express themselves. As a result, the industry is growing and Gen Z has become its coveted, but elusive audience. A question still lingers: where can Gen Z be reached and it is looking more and more likely that they are turning to social media, TikTok in particular, to explore this newfound love for food.”

TikTok’s influence on food and the industry as a whole has become undeniable. 53% of Gen Z respondents say they find inspiration for new foods through the popular social media app. TikTok has become an important tool for brands, informing more than just marketing strategies these days. Major food companies are developing entirely new product lines based on movements that spin up on the app. Not to mention, the rise of “food influencers” on TikTok stemming from overnight stardom through viral videos.

Gen Z is all about discovery, and food is no exception. They are eager for unique culinary experiences and are adventurous eaters. Due to the pandemic, Gen Z has become self-taught at-home chefs, thanks to the help of social media. This trend doesn’t appear to be slowing down anytime soon as Gen Z has found a new way to be authentically themselves and brands and marketers should be taking note.

To learn more about the Cassandra Report® and the benefits of becoming a Cassandra client, please visit https://cassandra.co.

We empower Fortune 500 companies to See Tomorrow® through trend forecasting, research, brand strategy, and consulting services that drive innovation and build deeper engagement with youth. Cassandra is an insights and cultural strategy group within ENGINE, a global, full-service media and marketing and services company. As the leading experts on young consumers and the cultural forces shaping their lives for nearly 20 years, Cassandra is the foremost authority on Millennials and Generation Z. Membership includes a 12-month engagement with our insights platform where you will have access to the leading syndicated study of the behaviors, mindsets, and preferences of young consumers as well as cross-industry examples and implications to inspire your brand. To learn more about the Cassandra Report® and the benefits of becoming a Cassandra client, please contact us. https://cassandra.co

ENGINE is a global, full-service media and marketing services company that unites culture and commerce to move brands forward faster. We are: Driven by data. Fueled by imagination. Powered by technology. Founded in 2005, ENGINE has global headquarters in New York and offices across North America, the UK, Europe and Asia-Pacific. ENGINE empowers clients to outperform in the present and win in the future with its vast range of marketing solutions including – insights, creative, media, data and technology. Find out more at enginegroup.com and follow @engineworldwide.